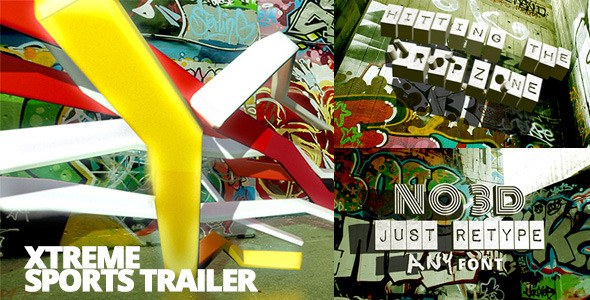 Key Features
Made with beginners in mind with a simple step-by-step tutorial
Urban Graffiti is a great backdrop for a wide range of extreme sports
Simple replacement of 8 video clips. You can easily make the length longer with longer clips.
Simplest method of changing text that you can imagine. Click and re-type.
3D Streaks are separate from the background so can be changed to your brand colors easily
This is a 30 second spot with a 3 second hold
The hiFOOTAGE logo at the end can be replaced or cut off
Text-only edit included if you have no sporting footage and just want supers on Graffiti
Stunning Full HD 1080p in NTSC and PAL
Multiple standard formats Included
Works with After Effects CS4 and above
Logically made with annotations throughout the project
Super fast render times
No plugins needed other than those included with After Effects