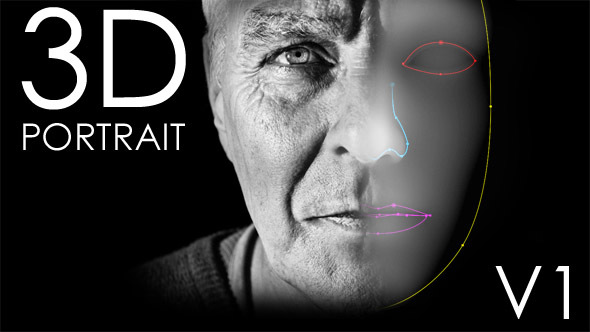 This is what you can do:
Bring in an image of a human face
Choose a preset that represents the angle from which your photo was shot
Modify build in masks for eyes, nose, lips and ears
Create custom masks to take objects like hair, neck and shoulder into consideration
Generate a 3D-Surface based on those masks
Move a camera around this surface and keyframe it to create an animation
Render it in Full HD (1920×1080)

What you get:
3D Portrait V1 (Will work with CS4 and higher)
60 Minutes of video Tutorial
PDF document with the controls explained

Please keep in mind that this tool was created to animate portraits of human faces only.
If you would like to animate all other types of photos please check out Photo Animator.

Also keep in mind that although this is a 3-dimensional effect, it is generated from a 2-dimensional image and therefore it has it’s limitations.
This doesn’t generate a full-spherical-3d-head-model, but displaces a planar surface.
There will be some kinds of photos which will work better then others. But for most of the photos I have tried it on, it worked great.
A basic understanding of After Effects’ 3d-Space and camera movement is recommended.
This is complex effect, so depending on your machine, expect little longer render times. You always have the option to lower the 3d-Surface’s resolution though.